The information contained on this page is not intended to replace the information gained from speaking to your physician or be taken as medical advice.

Spina Bifida literally means “split spine.” Spina Bifida happens when a fetus is in its very early stages, usually before a mom even knows she is pregnant. The neural tube, which typically folds in half like a pancake and “zips” shut, does not fully close; therefore leaving an opening which is what we call the “lesion level” or “defect”.

There are three main types of spina bifida. Occulta – most people that have Occulta do not even know they have it. There may be a small patch of hair or a dimple in their back and the person may experience some back aches but there is no paralysis or other serious issues. Meningocele – this is when part of the spinal cord protrudes out of the spine (usually in a sac) but does not involve the actual nerves. This is the most rare type of spina bifida and individuals with this type may have minor disabilities. Myelomeningocele – this is the most severe form of spina bifida. The defect happens when the spinal cord and nerves come out of the back (usually in a sac). The amniotic fluid damages the nerves and often kills nerves. Individuals with this type of spina bifida often experience paralysis along with bowel and bladder weakness. Accompanying conditions like Hydrocephalus and Chiari Malformation Type II are often associated with this type of spina bifida. 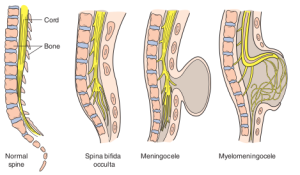 Spina bifida can be detected by ultrasound, blood tests and/or an amniocentesis.

There is no known cause of spina bifida; however, researchers believe there is a correlation between lack of folic acid (or lack of your body properly processing folic acid) and genetic and environmental factors.

Each case of spina bifida is different. Even two people with the same lesion level will not necessarily have the same functionality and may not be medically treated in the same manner. We call this “the snowflake affect.” 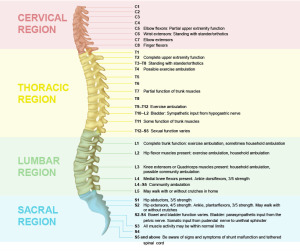 Hydrocephalus (or extra fluid on the brain) is often associated with spina bifida. About 80% of people with spina bifida also have this condition.  Within the past few years there have been great advancements in the treatment of hydrocephalus. There is now a programmable VP shunt which is placed behind the right ear. There is a catheter that goes into the ventricle of the brain and attaches to the valve and then another catheter that leaves the valve, goes down the neck and abdomen and drains into the stomach. Once the spinal fluid is in the abdominal cavity, it is absorbed. All of the tubing is under the skin, not visible to the eye; however, you can feel the tubing under the skin. Most shunts are permanent and are not removed even if the individual does not require the assistance of the shunt. It is important to note that like any man-made device, a shunt can fail, get infected or malfunction – all of which would require surgery. 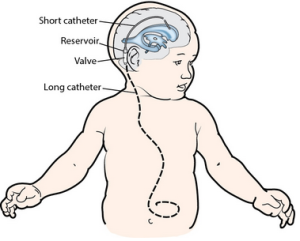 Arnold Chiari Malformation Type II: Most individuals with spina bifida also have what is called Chiari Malformation (Type II is specific to spina bifida). The malformation happens from the spinal cord tugging downward due to the open lesion on the back causing a downward displacement of the cerebellum.  To easily put it, the bottom/back part of the brain is tilted down into the spine which can sometimes restrict the functionality of that portion of the brain. Most people with spina bifida are not symptomatic of their Chiari; however, when symptoms arise that are severe, such as breathing problems, aspiration and lack of motor function, surgery is required. The surgery performed is called a Suboccipital Craniectomy and Cervical Laminectomy. A neurosurgeon may decide to also do a duraplasty as well. This surgery involves removing a small portion of the skull in the back of the head and taking out the lamina (front part) portion of the spine for the vertebrae affected. 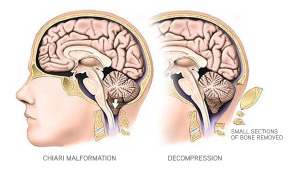