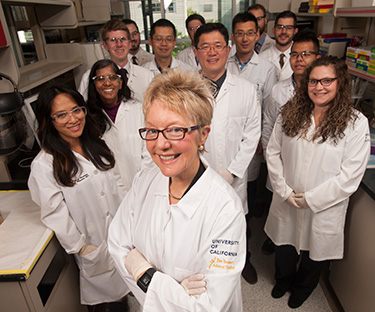 We found this article to be particularly interesting. We are so excited about the medical advances being made and the research being done on how to improve the lives of children with spina bifida. This is only the beginning! To read the full article please visit: https://www.ucdmc.ucdavis.edu/publish/news/newsroom/9953

The lower-limb paralysis associated with spina bifida may be effectively treated before birth by combining a unique stem cell therapy with surgery, new research from UC Davis Health System has found.

Fetal surgeon Diana Farmer (front), stem cell bioengineer Aijun Wang (behind her) and their research team are testing placental stem cells as a treatment for the paralysis associated with spina bifida.

The study, conducted in an animal model, was led by Diana Farmer, the fetal surgeon who helped pioneer in utero treatment for spina bifida — a congenital birth defect that occurs when the spinal cord does not close properly, leading to lifelong cognitive, urological, musculoskeletal and motor disabilities. Farmer’s chief collaborator was Aijun Wang, co-director of the UC Davis Surgical Bioengineering Laboratory.

“Prenatal surgery revolutionized spina bifida treatment by improving brain development, but it didn’t benefit motor function as much as we hoped,” said Farmer, chair of the UC Davis Department of Surgery and senior author of the study, published online today in Stem Cells Translational Medicine.

“We now think that when it’s augmented with stem cells, fetal surgery could actually be a cure,” said Wang.

Farmer and Wang are the first to combine fetal surgery with a placental stem cell treatment to reduce the effects of spina bifida, which in children can range from barely noticeable to severe. The most common and disabling form of the disorder, called myelomeningocele, causes the spinal cord to emerge through the back, often pulling brain tissue into the spinal column and causing cerebrospinal fluid to fill the interior of the brain. Permanent shunts are required to drain the extra fluid.

Farmer was senior author of the landmark Management of Myelomeningocele Study (MOMS), which showed that prenatal surgery could improve cognitive outcomes for the 1,500 children born each year in the U.S. with spina bifida. A majority of treated children in the study, however, were unable to walk independently at 30 months of age.

For the current research, lambs with myelomeningocele received fetal surgery to return exposed tissue to the spinal canal. Human placenta-derived mesenchymal stromal cells (PMSCs) — known for their neuroprotective qualities — were preserved in hydrogel and applied to the site of the lesion. A scaffold was placed on top to hold the hydrogel in place, followed by surgical closures to complete the repair.

[View video of Diana Farmer as she discusses her research here]

“We have taken a very important step in expanding what MOMS started,” said Wang. “Next we need to confirm the safety of the approach and determine optimal dosing.”

Farmer and Wang will continue their efforts with funding from the California Institute for Regenerative Medicine. With additional evaluation and FDA approval, the new therapy could be tested in human clinical trials.

“Fetal surgery provided hope that most children with spina bifida would be able to live without shunts,” Farmer said. “Now, we need to complete that process and find out if they can also live without wheelchairs.”

More information about UC Davis Health System is at https://healthsystem.ucdavis.edu.